Hepatitis B Virus in Parrots

Avian Hepatitis B Virusses (or more correctly Virii) have already been discovered in ducks, herons, geese, storks and cranes. The common denominator was that these species are all wild birds that are more or less related.

It was a bit of a surprise to learn that a new type of Hepatatis B Virus was isolated from a ring-necked parakeets (Psittacula krameri) in Poland[1]. Designated the Parrot Hepatitis B Virus, it share less than 76% sequence identity with other Hepatitis B Virus isolates and is phylogenetically most closely related to heron and stork hepatitis B viruses isolates. 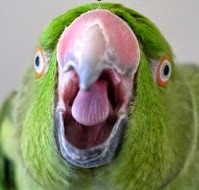 Subsequent investigations showed[2] that isolates of Parrot Hepatitis B Virus could also be harvested from other birds including an Australian Crimson Rosella (Platycercus elegans) and an African grey parrot (Psittacus erithacus).

Ring-necked parakeets are a particularly adaptable species and are now a notorious pest in several countries. In the Netherlands, the feral population has been estimated at more than 10,000 birds, more than double the number of birds estimated in 2004. See here.