Hepatitis A Virus in Marsupials 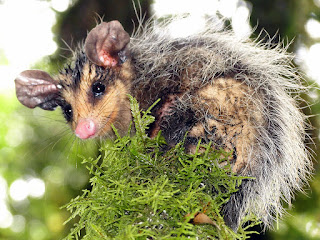 Only recently, highly diverse nonprimate hepatoviruses were discovered, suggesting that the ancestors of Hepatitis A Virus may have evolved in mammals other than primates prior to their introduction into humans. Additionally, the unique structural properties of Hepatitis A virusses, resembling those found in ancestral insect viruses, suggest that it is an ancient picornavirus[2].

The expanded genus Hepatovirus now includes at least 16 putative virus species. The majority of novel hepatoviruses were obtained from bats and rodents.

Now, scientists have discovered a novel marsupial Hepatitis A Virus in Brazilian common (or big-eared) opossum (Didelphis aurita)[3]. That is a potential problem, since opossums are commonly hunted and consumed as wild game by resource-limited (read: poor) Brazilian communities.

The results of this research strongly suggest that the species barriers toward Hepatitis A Virus infection seem penetrable.