Hepatitis B Virus in Maxwell’s Duikers

If you needed further proof that Hepatitis B virusses are infecting man and animals all over the world, look no further. When six dead Maxwell’s duikers (Philantomba maxwellii), a small antelope, from Taï National Park, Côte d’Ivoire were examined, scientists found yet another novel hepadnavirus, the family of virusses that causes Hepatitis B infections[1]. 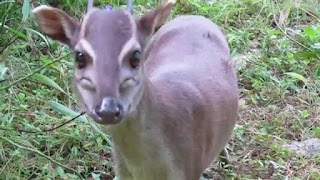 Viral copy numbers in the blood of these dead Maxwell's Duikers were in the range known from humans with active chronic infections leading to liver damage, suggesting this virus could be pathogenic in duikers, though many orthohepadnaviruses appear to be apathogenic in other hosts.

Analysis placed the virus as a divergent member of the mammalian clade of orthohepadnaviruses, though its relationship to other orthohepadnaviruses remains uncertain. This represents the first orthohepadnavirus described in an artiodactyl (or even-toed ungulate), an order of mammals that includes pigs, peccaries, hippopotamuses, camels, chevrotains, deer, giraffes, pronghorn, antelopes, sheep, goats, and cattle. . The scientists have tentatively named this virus Taï Forest hepadnavirus.