The precise moment of ancient human migration into continental Sahul (the combined landmass of Australia, New Guinea, and Tasmania) is still subject to debate. 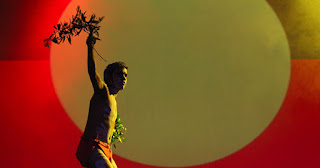 Chronic Hepatitis B Virus infection is endemic in Australian Aboriginal and Torres Strait Islander people and is an important cause of morbidity and mortality due to liver disease and liver cancer.

The research team collected Hepatitis B Virus samples from people living in over 30 communities across the Northern Territories and found Hepatitis B Virus isolated from Aboriginal Australians is a unique strain, known as HBV/C4, not found anywhere else in the world.

The researchers found that the precursor of the modern Hepatitis B Virus/C4 virus entered Australia over 51,000 years ago, and then separated into two groups; one centred in the northwest region, and a second in the central/eastern region of the Northern Territories. Strikingly, the two groups share a similar geographical distribution to the two main divisions of Aboriginal Australian languages spoken in Australia today.

The analysis also suggested that Hepatitis B Virus/C3 was carried into Melanesia by Indigenous Melanesians who migrated through New Guinea north of the highlands.