The family Hepadnaviridae contains Hepatitis B viruses that are enveloped viruses with reverse-transcribed DNA genomes.

However, recently scientists reported the discovery of a new family of fish viruses, designated Metahepadnaviruses, which lack one of the four Open Reading Frames, the ORF X, compared to Hepadnaviriruses. 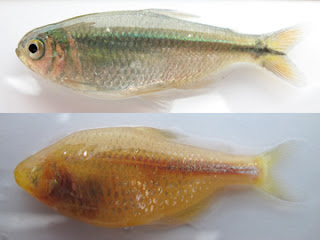 The ORF X encodes a 16.5-kd protein (HBxAg) with multiple functions, including signal transduction, transcriptional activation, DNA-repair and inhibition of protein degradation. The mechanism of this activity and the biologic function of HBxAg in the viral life-cycle remain largely unknown. However, it is well established that HBxAg is necessary for productive Hepattis B infection in vivo and may contribute to the oncogenic potential of Hepattis B viruses[1].

Otherwise these Metahepadnaviruses exhibit key characteristics of Hepatitis B viruses, including genome replication via protein-primed reverse-transcription and utilization of structurally related capsids[2].

The very first of these Metahepadnaviruses is the Tetra Metahepadnavirus (TMDV) of the Mexican tetra (Astyanax mexicanus). Collectors covet this species because it consists of distinct two subspecies: a 'normal' and a blind version.

Thousands of years ago, a population of Mexican tetras in northeastern Mexico swam (or was swept) from its hospitable river home into underwater caves and became trapped. Facing a dramatically different environment of near total darkness and hardly any food, the fish had to adapt very fast. Among other changes, these 'cavefish' swiftly (in evolutionary terms, within just a few thousand years) lost their pigmentation and their eyes. Regressive evolution is the correct term[3].

[1] Liang: Hepatitis B: The Virus and Disease in Hepatology – 2010
[2] Lauber et al: Deciphering the Origin and Evolution of Hepatitis B Viruses by Means of a Family of Non-enveloped Fish Viruses in Cell Host & Microbe – 2017
[3] Protas et al: Regressive Evolution in the Mexican Cave Tetra, Astyanax mexicanus in Current Biology - 2008