Viral hepatitis is one of the leading killers across the globe, with a death toll that matches Aids or tuberculosis, research suggests. A new report estimates that hepatitis infections and their complications led to 1.45m deaths in 2013 - despite the existence of vaccines and treatments[1]. The World Health Organization data shows there were 1.2m Aids-related deaths in 2014, while Tuberculosis led to 1.5m deaths. 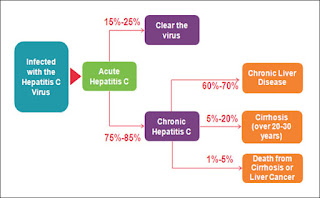 Viral hepatitis usually refers to at least five different forms of virus (known as A, B, C, D and E) that can infect humans - some can be spread through contact with infected bodily fluids, while others through contaminated food or water.

Most deaths worldwide (96%) are due to Hepatitis B and C, which can cause serious liver damage (cirrhosis), and predispose people to liver cancer. But, because people don't always feel the symptoms of the initial infection, they can be unaware of the long-term damage until it is too late.

Scientists examined data from 183 countries, collected between 1990 and 2013. They found the the number of deaths linked to viral hepatitis rose by more than 60% over two decades – in part due to a growing population.

Dr Graham Cooke of Imperial College London said: "Although we have vaccines to treat Hepatitis A and B and we have new treatments for Hepatitis C, there is very little money invested in getting these to patients - especially compared to malaria, HIV/AIDS and TB.

The study suggests the problem is biggest in East Asia. But unlike many other diseases, deaths from viral hepatitis were higher in high and middle income countries than in lower income nations.