When you receive a tattoo, your skin is being pierced by a needle and injected with small amounts of ink. Unsterile tattooing can transmit Hepatitis C Virus, and though it is unclear exactly what percentage of people with the virus got it through tattooing, a study found that people with Hepatitis C were almost four times more likely to report having a tattoo, even when other major risk factors were taken into account. 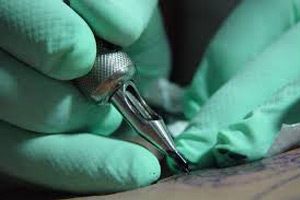 There is not enough research done to determine the exact percentage of people who are diagnosed with Hepatitis C and who got it through tattoos. However, a recent study discovered that people with Hepatitis C were close to four times more likely to report having a tattoo, even when other risk factors were accounted for[1].

If the tattoo was done in a prison or another non-professional setting, the risk was significantly greater[2].

For those responsible enough to go to a professional tattoo parlor where infection control measures are better, there are still health risks to consider. Most people assume that tattoo ink is ‘safe’, but the reality is that the ink is not regulated. The American FDA has received reports of bad reactions to tattoo inks right after tattooing or even years later.

Most colors of standard tattoo ink are derived from heavy metals, including lead, antimony, beryllium, chromium, cobalt nickel and arsenic.