A team of researchers not only recovered ancient viral DNA from skeletons but also reconstructed the genomes of three strains of Hepatitis B Virus.

For this study, the researchers analyzed samples from the teeth of 53 skeletons excavated from Neolithic and medieval sites in Germany[1]. The remains dated from around 5000 BC to 1200 AD. The researchers screened all samples for viral pathogens and detected ancient Hepatitis B Virus in three of the individuals. Full Hepatitis B Virus genomes were recovered from these samples, two of which were from the Neolithic period, dating to about 7000 and 5000 years ago, and one from the medieval period[2]. The Neolithic genomes represent the by far oldest virus genomes reconstructed to date. 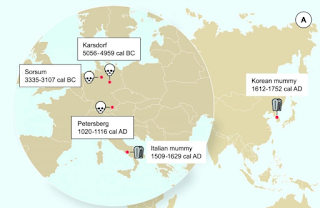 These findings point to a complicated history for the virus, which may have involved multiple cross-species transmission events.