From 1 September 2016 until 13 January 2017, a total of 693 cases including 11 deaths of acute jaundice syndrome (AJS) have been reported from Am Timan, Chad, a country in the north of Africa, situated south of Libya and east of Sudan[1]. 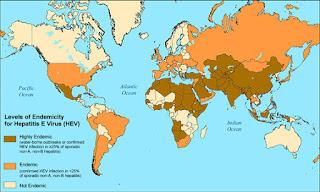 Since September 2016, 11 deaths have been reported among the hospitalized cases but the total case fatality might be underestimated.

Approximately 90% of the AJS cases were reported from Am Timan which appears to be the epi-centre of the ongoing outbreak, and most of the cases are identified through active case findings. As of 13 January 2017, AJS cases have been reported from 59 different quartiers in and surrounding Am Timan.