Hepatitis A Virus in Seals

Not so very long ago, scientists believed that primates – including humans - were the only species that were at risk for an infection with the Hepatitis A Virus. Over the last few years, it became evident that other species could also become infected with Hepatitis A Virus or a Hepatitis A-like virus.

At least 13 additional species of the genus Hepatovirus have now been identified[1]. These species infect several small mammals. 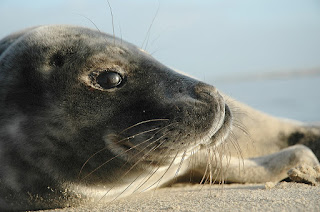 Recently, a new Hepatitis A Virus has been discovered in North American harbour seals (Phoca vitulina)[2]. The virus is related to human hepatitis A virus. The researchers tentatively named the virus phopivirus, although my suggestion would be Seal Hepatitis A Virus.

[1] Drexler et al: Evolutionary origins of hepatitis A virus in small mammals in PNAS – 2015
[2] Anthony et al: Discovery of a Novel Hepatovirus (Phopivirus of Seals) Related to Human Hepatitis A Virus in mBio - 2015