First a bit of a horror story: Hepatitis E was first described in 1983 when scientists reproduced Hepatitis E Virus infection in a healthy volunteer who ingested pooled stool extracts from patients presumed to have non-A, non-B hepatitis[1].

Hepatitis E Virus infection develops in most individuals as a self-limiting, acute, icteric hepatitis. Mortality rates hoover around 1%. Some affected individuals will develop hepatic failure, a serious condition that is frequently fatal without a liver transplant. This complication is particularly common when the infection occurs in pregnant women, where mortality rates rise dramatically to up to 25%. 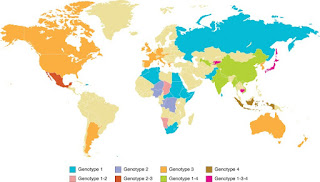 One possible explanation for the great genomic variability of Hepatitis E Virus is an animal origin. Analysis have shown a close relationship between swine and human isolates of the same geographic area in industrialized countries.