Hepatitis B Virus in Snow Geese

In 1999, research was published[1] where scientists described the identification of an evolutionary distinct new avian hepadnavirus. Snow geese (Anser caerulescens) in Canada appeared infected with a virus that was closely related to Duck Hepatitis B Virus. 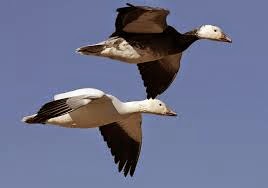 Analysis revealed some unique features compared with other avian Hepatitis B viruses. The virus was designated Snow Goose Hepatitis B Virus. Infected geese secreted a significant amount of virion-like particles.

This research again shows the versatility of the virus. Ever more species are found to harbour a variant of the Hepatitis virus.